A complete app review for parents.

What is the Mixer app?

What do parents need to know about Mixer?

I think I’ve heard of this app but refresh my memory. In August 2019, popular gamer Tyler “Ninja” Blevins left streaming platform Twitch to stream exclusively on Mixer. In October 2019, Mixer became the second most popular platform for streaming.

It’s live streaming content (which always carries risk). The streams are live so anything goes. We watched a few streams and there was no vulgar language on the Family Friendly channels. Just know that some channels do have streamers that will use vulgar language.

There’s live chat. There is also live chat during the stream. Anyone can comment. You can view a commentator’s profile, send them a private message (called whisper), and report, block, or follow them. Most of the chats we scrolled through were very clean as far as language goes. Some people post links and they will open up in Safari (this blog post will show you how to toggle off Safari).

But our experience shows that any app with a chat feature, especially one that is unmoderated, will always eventually have predatory activity. Just make sure your kids using MIXER know how to handle “tricky people.”

How to enable Mixer’s minimal parental controls. The only option that resembles parental controls at all is the ability to filter streaming content. But you can’t lock it in. Here are your options:

What are Mixer sparks and embers and how can I use them?

Mixer’s notifications work just like social media. During account set-up, you can tell the app to send notifications related to when streamers you’re following start a new live stream or when online challenges might start.

How do I block a streaming account on Mixer? 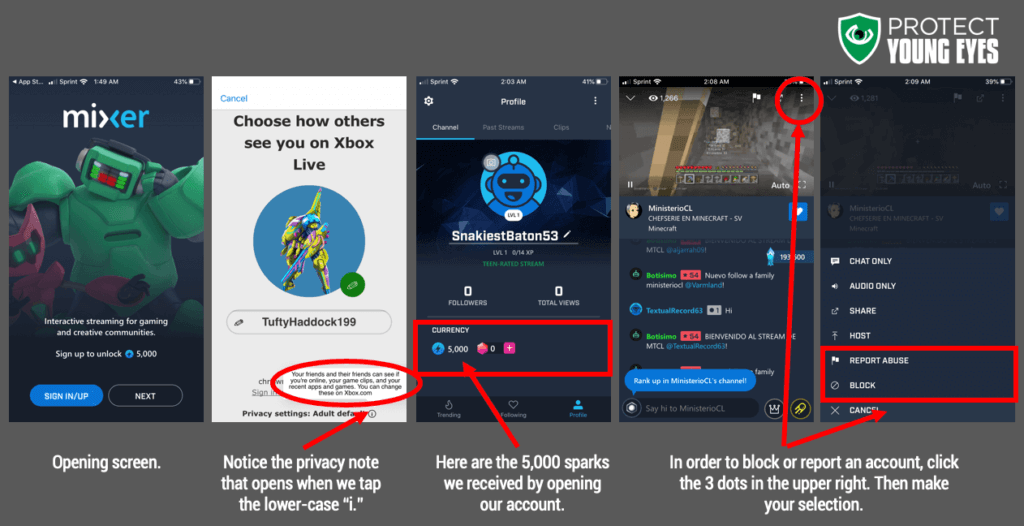 The bottom line – is Mixer safe for your kids?

Due to the live streaming aspect to Mixer, we are hesitant to recommend for tweens unless mom and dad are very involved and their kids are equipped to know how to handle what they’re seeing. For teens, parents might want to co-play from time-t0-time, but at a minimum, be somewhat involved.

Now what? Have you heard of Covenant Eyes?

Do you have a high school son or daughter who you’re trying to teach how to use technology responsibly? Accountability is the way. Covenant Eyes provides Filtering and Accountability services across many of the devices your home loves using their revolutionary SCREEN monitoring technology. Get 30 days free using promo code protectyoungeyes.