For Many Parents, Apple’s Parental Controls are Rotten to the Core 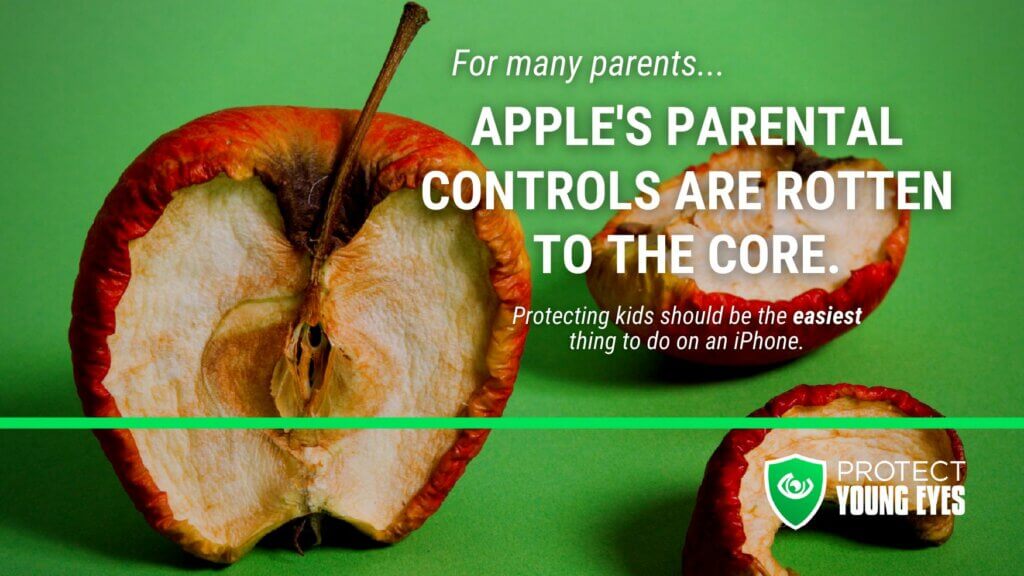 For Many Parents, Apple’s Parental Controls are Rotten to the Core

Jonathan (*name changed for privacy) was only 8 years old when he was first exposed to hardcore pornography on his school-issued iPad. His parents had assumed that their young son would be protected, the device had come from the school after all. They were wrong.

His father, a successful accountant, and his mother, a business owner, had always tried their hardest to protect Jonathan. They were attentive and caring parents, but what they didn’t know is that the Apple parental control systems place too much burden on the parents. They are full of backdoors and loopholes, they are complex, and app ratings are often inaccurate and misleading. Apple parental controls are quite simply, “rotten to the core.”

In a recent heartbreaking testimony for a proposed Utah law requiring safer defaults on devices, a distraught mother testified about how her son was exposed to pornography for years simply because she didn’t know how to engage the parental controls. She lamented that she could have never guessed that iPhone safety settings were hidden “three subcategories deep” under the nonsensical title of “Screen Time.” She explained that it was finally a caring neighbor, not the device, that informed her how to walk through the “really long process” of setting up parental controls, but that it was too late to protect the innocence of her son.

My inbox is unfortunately filled with stories like these. Educated, caring parents who are unable to protect their own children because Apple, one of the largest technology companies in the world, refuses to implement basic safety features on their devices. A whopping 88% of teens own an iPhone according to a recent Piper Sandler survey, and 90% expect their next phone to be an iPhone. Simple changes could protect millions of kids, effortlessly. Changes like:

Third-party internet safety apps will never effectively plug the gaping holes left by Apple’s parental controls. Apple has a history of either kicking these apps out of their App Store or limiting their functionality within iOS. It’s an impossible situation for parents – every kid wants an iPhone, but Apple’s parental controls are full of holes, and third-party controls require a subscription, are complicated, and are limited.

Even if Apple did allow third-party parental control apps more access in iOS, this approach favors tech-savvy parents with resources who can afford subscription-based apps. This withholds critical safety protections from those children who are already marginalized. Shifting the child safety responsibility to other companies, that in turn charge for their services, is discriminatory.

This is also a different approach than with everything else in the physical world. Imagine ignoring safety for playgrounds or bicycles in the same way. Manufacturing them with minimal protections, hiding those safety features, and then expecting parents to do the rest.

Apple’s current approach favors the privilege of the involved parent. And I’m sorry, but not every child has this.

Three Forces Should Keep Business in Check – All Have Failed

Leaders, laws, and liability keep companies in check. Without these three forces in place, profits take over, and people suffer. Which almost always means that children suffer the most.

Tim Cook (Apple CEO) has the most brilliant engineers on earth – they can make a phone do anything elegantly and intuitively – but don’t do enough to utilize those talents to keep kids safe through their products (more on this below). And just watch any Congressional appearance from Mark Zuckerberg and it’s easy to see that profits and ego beat protections and privacy at Facebook every single time. And how many childhoods have been altered by Snapchat and Instagram, which still refuse to give parents any element of control over its features? Leaders have failed our children.

Next, laws. In 1996, Section 230 of the Communications Decency Act (CDA) said that internet companies could create whatever technologies they wanted, and they wouldn’t be held liable for what content people put in them. It was a novel attempt at creating space for innovation that never anticipated the risks, intelligence, or features that exist today. In the year 2000, The Children’s Online Privacy Protection Act established age 13 as the digital age of adulthood. This is laughably inadequate to protect children from manipulative and harmful practices in 2021. Laws have failed our children.

Although lawyers are finally finding creative ways to pierce the tech immunity shield, there needs to be more legal liability. It is obvious that the internet we have today is not the internet we were dreaming about in 1996 when Section 230 was written. Lawsuits are part of the reason we feel confident when we buy an infant car seat or a crib. Every other industry has a healthy amount of liability, and it keeps companies honest and protects consumers. Liability has failed our children.

Yes, we need updated laws and more liability because there will always be bad actors. But the quickest way to protect children is when leaders make immediate change.

Apple’s Shareholders Agree that the Company Should do More

Apple shareholders recognized the importance of Apple providing parental controls that are “intuitive and easy to use.” In a 2018 letter to the Apple Board of Directors they pointed out that there are a “dizzying array” of other parental control solutions available but noted that they “are clearly no substitute for Apple putting these choices front and center for parents. As Apple understands better than any company, technology is best when it is intuitive and easy to use.”

Thank you, Google for Protecting Chromebooks!

Google’s most recent move to lock in safety features on all school-issued Chromebooks in the United States shows how ONE decision can so positively impact the sanctity of childhood. Here’s a statement from Dawn Hawkins, CEO of The National Center on Sexual Exploitation (NCOSE) announcing this amazing move:

“In time for children returning to school, Google Chromebooks will default to safety, keeping millions of kids safer. These crucial improvements will drastically limit the amount of exposure to harmful content and potential predators through school-issued Chromebooks. These changes will also greatly ease the burden on administrators and teachers – who are often left without sufficient IT support – to try to figure out how to turn on all the safety features,”

If Google and Apple were countries, their market valuation would make them the 9th and 10th largest countries on earth. Larger than the gross domestic product (GDP) of Canada, Russia, and Australia. They both have almost endless financial and human resources.

Here’s our question: if Apple cares about child protection, then why aren’t Apple’s protective features as well-designed and intuitive as all of their other features? Parental controls should be the easiest and most automatic features to set up on an iPhone.

Apple Take the Lead and #default2safety

Apple you have the resources to fix the problems. Your talented software engineers could solve shortcomings in current parental control protections in weeks!

We’re leading a campaign, joined by NCOSE, calling on Apple to implement ten simple solutions that would change everything. Visit our landing page today and sign on with your support!

Please join us in our campaign #Default2Safety.

Apple, we are not asking you to do our job for us. We are simply asking that you stop making it more difficult. You have so much amazing potential to help families! We are inviting you to do the right thing for the kids.