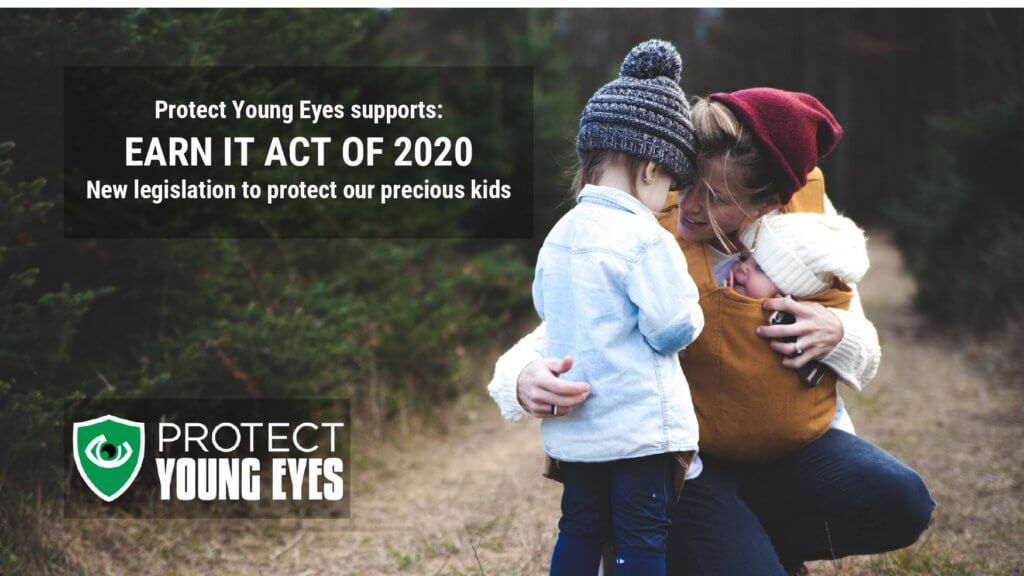 Protect Young Eyes (PYE) has issued the following letter of support to Senators Lindsey Graham and Richard Blumenthal for their legislation, the Eliminating Abusive and Rampant Neglect of Interactive Technologies Act of 2020 (EARN IT Act of 2020). **Note – there are very graphic themes discussed in this letter. None of it is fabricated. This is the nature of the content we are fighting against. Please read with caution.

On behalf of Protect Young Eyes and the thousands of families that we serve through our nation-wide educational efforts, I am writing to express our support for your legislation, the Eliminating Abusive and Rampant Neglect of Interactive Technologies Act of 2020 (EARN IT Act of 2020).

I began Protect Young Eyes five years ago because the internet is complex and even diligent parents are overwhelmed by the digital choices their children are facing. Through thousands of hours of research, hundreds of presentations at schools around the country, and dozens of articles examining digital trends, we have witnessed both the wonderful potential and the troubling and pervasive darkness that exists in the pockets of millions of young people today.

For far too long, electronic service providers (ESPs) have benefited from a digital landscape that favored their growth and expansion by giving them limitless immunity for their content, at the expense of the safety and protection of our children.

PYE supports the EARN IT Act because it provides ESPs with a roadmap to begin a new chapter. One that asks them to adopt specific and consistent best business practices developed by industry and subject matter experts to prevent, reduce, and respond to the online sexual exploitation of children. Currently, the immunity provided by Section 230 of the Telecommunications Decency Act provides no incentive for ESPs to utilize consistent best practices across all of their platforms. As a result, infants and children are sexually exploited and trafficked online by predators who share images of their sexual abuse freely across the internet.

The extreme proliferation of online exploitation content was reported in a series of 2019 NY Times investigations. In the November 2019 article, Child Abusers Run Rampant as Tech Companies Look the Other Way, Times reporters Keller and Dance exposed the rampant neglect and complete disregard for child safety shown by large ESPs, even when obvious examples of child sexual abuse material were brought to their attention. According to the Canadian Center for Child Protection who reported images to Google:

One image captured the midsections of two children, believed to be under 12, forced into explicit acts with each other. It is part of a known series of photos showing the children being sexually exploited.

The Canadian center asked Google to take down the image in August last year, but Google said it did not meet its threshold for removal, the documents show. The analysts pressed for nine months until Google relented.

With two other images brought to Google’s attention:

One was of a young girl, approximately 7, with semen covering her face. The other was of a girl, between 8 and 11, with her legs spread, exposing her genitals. Google told the Canadian center that neither image met “the reporting threshold,” but later agreed to remove them. “It baffles us,” said Lianna McDonald, the center’s executive director.

Child sexual abuse material is exactly what it says it is – the digital depiction of babies and young children being raped and freely trafficked online. This cannot continue. Not on our watch.

This is why PYE is so proud to support this important legislation. Thank you, Senators Graham and Blumenthal for having the courage to defend the vulnerable among us with EARN IT. As I stated during the Protecting Innocence hearing last year, I cannot think of anything more noble for us to be spending our time on than the safety and protection of our nation’s children. Your leadership is admirable, and we are ready to lock arms with you and see this through.