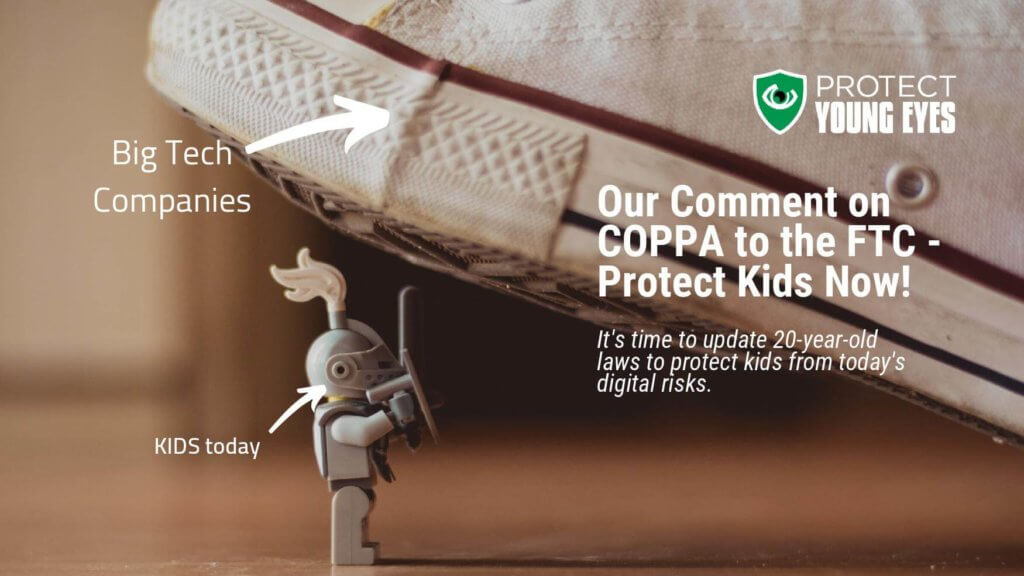 January 2, 2020/Chris McKenna/Comments Off on Our Comment on COPPA – Protect Kids NOW

Background: in 1998, the Children’s Online Privacy Protection Act (COPPA) was voted into law and went into effect in 2000 due to the tireless efforts of Senator Edward Markey (D-MA). It’s goals were to:

In 1998, an APP was something you completed so that you could go to college. In 1998, the only computers in homes were large devices with 1GB hard drives, and 15” monitors. In 1998, we’re still two years before Xanga, five years before MySpace, six years before “thefacebook.com” first became available to just Harvard students, and nine years before the very first iPhone was released.

And, 21 years later, COPPA is STILL the primary law that protects children online. It’s woefully outdated and does not address today’s digital risks.

In December, the Federal Trade Commission, which is the wing of the US government responsible for COPPA and COPPA enforcement, asked for public comments about the Act and what changes, if any, should be made. Many child advocates like PYE are concerned that the FTC is beginning to feel pressure from Big Tech companies who would love greater access to data.

Protect Young Eyes has made it a strategic priority to focus on changing or creating laws to provide greater protections for children.

We submitted the following statement to the FTC explaining why age 13 isn’t old enough. Do you agree? Please let us know in the comments how you feel.

The Federal Trade Commission (“FTC” or “Commission”) has requested public comments related to its implementation of the Children’s Online Privacy Protection Act (“COPPA” or “the Act”), through the Children’s Online Privacy Protection Rule (“COPPA Rule” or “the Rule”). This Act provides children and families with critical privacy safeguards. Since passing COPPA in 1998, the FTC wisely approved revisions to the COPPA Rule in 2012 to broaden the definition of protected information in order to keep pace with technology advancements.

At Protect Young Eyes, our greatest concern is that recent comments and actions from the FTC seem to indicate that the interests of giant tech companies outweigh the interests of our precious children. And, we do not believe that large technology organizations can be trusted to look out for what’s best for our sons and daughters. Only strong laws, strongly enforced, with strong penalties will do anything to deter corporate behavior that prioritizes profits over protection.

Technology companies clearly recognize that children represent big money on their platforms. YouTube’s top revenue grossing star is a 7-year-old named “Ryan” for his toy reviews. Instagram and Snapchat are used by 75% and 76% of US teens respectively. Giant tech companies want information about our children. It’s up to you to protect them.

Parents can only do so much. The ubiquity of technology demands a joint effort from well-intentioned parents, law makers, and the enforcers of those laws. And with technologies that are becoming increasingly smarter and more godlike, it’s imperative that all three work harder than ever to protect our children from an increasingly hostile online world.

To quote the comment letter submitted by the honorable Senators Markey, Blumenthal, Hawley, and Blackburn to the FTC on October 4, 2019:

“…the FTC’s failure now and in recent years to fully enforce COPPA compliance has us concerned that an update at this time could diminish children and parents’ control of their data or otherwise weaken existing privacy protections. Now is not the time to pull back. As children’s use of technology continues to increase, so too does the appetite by tech giants for children’s personal information. Your agency’s obligation is to put consumers’ interests first and enforce the law.”

We fully agree with this statement.

In comments recently reported by the Wall Street Journal, Senator Markey said that making 13 the age of digital adulthood was too young based on the digital risk present in 1998, but it was the best he could do under pressure from e-commerce companies who wanted to maintain access to a lucrative teen market.

Let kids be kids for just a little while longer.

It was Senator Markey back in March 2019 who said, “In the 21st century, we need to pass bipartisan and bicameral COPPA 2.0 legislation that puts children’s well-being at the top of Congress’s priority list. If we can agree on anything, it should be that children deserve strong and effective protections online.”

We agree with the legislation introduced in March 2019 by Senators Edward J. Markey (D-Mass.) and Josh Hawley (R-Mo.) prohibiting internet companies from collecting personal and location information from anyone under 13 without parental consent and from anyone 13- to 15-years old without the user’s consent. We also concur with the creation of an “Eraser Button,” allowing parents and kids to delete personal information instantly, and a “Digital Marketing Bill of Rights for Minors” that limits the collection of personal information. We also agree with the bill’s recommendation that a Youth Privacy and Marketing Division be created at the Federal Trade Commission (FTC), responsible for addressing the privacy of children and minors and marketing directed at children and minors.

Now is the time for stronger protections for children, not weaker ones. Your decision will echo into millions of homes across our great country for years. Our precious children are counting on you to protect them.