Emma Didn’t Have Social Media. How #delayistheway Shaped her Life. 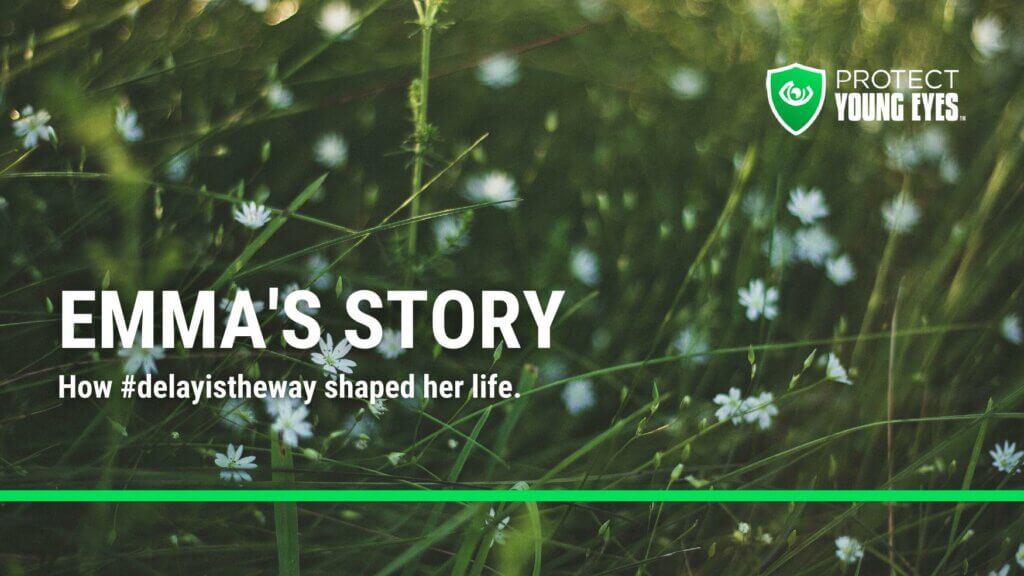 Emma Didn’t Have Social Media. How #delayistheway Shaped her Life.

On March 25, I received an email from a college freshman, who gave me permission to publish her message using a different name. Her parents gave her a smartphone in middle school but didn’t give her social media until well into high school, and it had a profound impact on her life.

Some naysayers in the internet safety space believe that a “delay” strategy is wrong. They believe that delay means we bubble wrap our kids and PREVENT them from using ANY technology. That is incorrect. PYE is a pro-kid, pro-tech, but PROTECT organization. Delay doesn’t mean NO TECH, but rather, SLOW TECH. Just like with Emma. In other words, we teach, train, prepare, scaffold, and model what good, healthy, helpful use of technology looks like. In summary, even if we say “no,” we teach them as if we’ve said “yes.” We talk and teach about everything. Why? Because digital doorways are everywhere.

That’s what Emma’s parents did. Here’s what happened:

Hello Chris! My name is Emma, and I am a freshman at Butler University. I was born and raised in Michigan, and I am currently pursuing a degree in Middle Secondary Education and History.

First, I wanted to thank you for the work that you are doing battling child pornography (child sexual abuse material or CSAM).

My parents followed your organization for a long time and used it as a tool to raise me in a world where social media and CSAM is becoming more common.

I did not get my first social media account until I was seventeen years old, and that was Facebook under close monitoring. About nine months later, I got Snapchat shortly before my eighteenth birthday. Since coming to college, I had to get a Twitter account for professional reasons only, but I don’t treat it as a social media site, but rather, a tool to further my education. Even though I have these social media sites, I still refuse to get Instagram and TikTok because of how I was raised, for I believe that social media can cause more harm than good, especially when it comes to the dangers it has for a child. I am old enough to know what is dangerous and what is not, but a child does not know this, and that is the danger I hope to eliminate.

My parents used your tools and advice to raise me into someone who in return, is advocating for more transparency on the issue of CSAM throughout the world.

I’ve been reading the news closely on this issue, and I find it shocking how battling CSAM isn’t more mainstream, especially with the EARN IT Act of 2022 passing the Senate Judiciary just one month ago. This is huge legislation that could not only limit the spread of CSAM, but it should be highlighted by the news media. I am shocked that I had to dig deep into the Internet to even find sources that were willing to talk about pornography, with the most recent mainstream story being Billie Eilish’s story of coming to terms with the dangers that pornography had on her life. That was back in 2021, and here we are in 2022 and I am frustrated to find little to no information on this topic in the mainstream media.

I am currently in a Peace and Conflict Studies class, and we are supposed to advocate on a topic that is disrupting the peace and justice of our world. I decided to advocate on the issue of battling CSAM because as someone who is going into education, I believe that my future students deserve the opportunity to have a childhood without the distraction and destruction of pornography. I am an advocate for the end of CSAM and the message needs to be spread.

With that being said, I appreciate what you are doing for the world, because if it wasn’t for your organization, I would not be the advocate I am today. Continue fighting for the lives of children, because you are making a difference, and I will continue to fight for not just my future students, but children all around the world. Thank you for your time.

2 thoughts on “Emma Didn’t Have Social Media. How #delayistheway Shaped her Life.”