Description: Messenger is quickly becoming a pseudo-social media platform. Some of its features include:

Other than lacking a feed of activity with likes and comments, Messenger has many of the features of a traditional, Facebook-like social media platform.

Blocking people you don’t know – if you have Facebook and Instagram, then you can receive DM requests from people you don’t follow in Messenger. This has been a problem for years. In October 2020, Facebook finally fixed this problem by giving uses the ability to block DM’s from people they don’t follow in Facebook and Instagram (these instructions are from Instagram, but it’s similar in Messenger: profile picture > Privacy > Message Delivery, then turn off the ability for people who don’t follow you to send you anything).

Location Settings – by default, Facebook Messenger shows user location and informs the person receiving a message where the user was located when they sent their message. Not a great idea for children’s privacy.  Good news – parents can turn off location services for this app in the privacy settings of your phone, to protect your child from divulging their location.

Sexting/Photo/Video Sharing – Messenger is no different than other messaging apps that encourage kids to share media (e.g., photos and videos) other than text. Make sure kids understand the immense risk that comes from sharing inappropriate media, which can lead to peer shaming, bullying, and legal issues related to child pornography.

Blocking – Messenger does allow users to block other users who might be a nuisance. You can do this by swiping left on a message and then following the prompts. But we would argue that your Messenger “friends” should only be people who you want to be communicating with anyway, so it’s just a good idea to keep the follower list scrubbed. 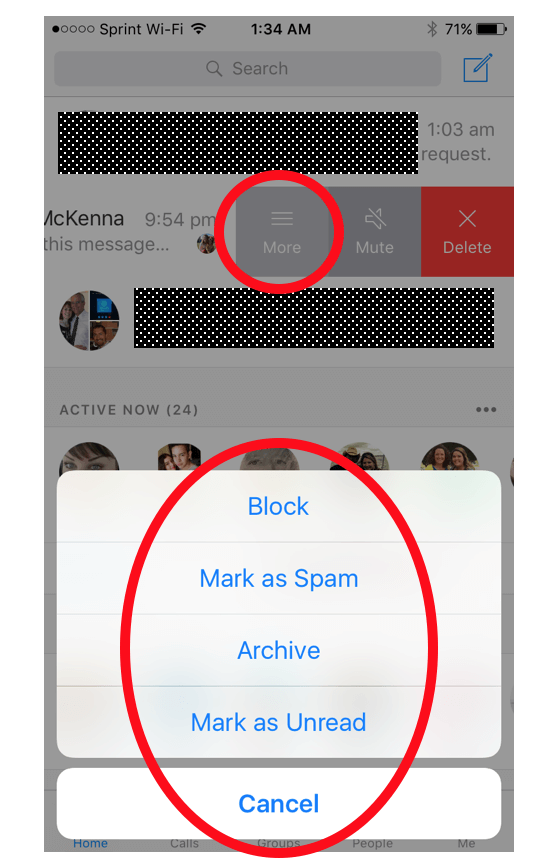 Web browsing – when web links are sent via Messenger, the receiver of the message doesn’t need to leave the Messenger app in order to browse the web. Even with Safari blocked on an iPhone, links can be followed. Unfortunately, while in the Messenger app, if using an iPhone, iPad or iPod Touch, the web browsing performed in Google, Bing or Yahoo while still in Messenger does not obey any content filtration system in place.

Messenger Rooms – Up to 50 people can video chat for an unlimited amount of time.

Vanish Mode – As of November 2020, users can enable a vanish mode in which messages, images, etc. will disappear after the recipient sees it and the chat is closed. If this sounds like Snapchat, you’re right because this feature was created to compete with that app. This feature is unfortunately asking for kids (and adults!) to be secretive. It is only available to use with your friends, and the recipient(s) has to agree to also use Vanish Mode. If someone takes a screenshot of the chat, then the sender will be notified.

When it comes to messaging apps, there are much safer options, like iMessage on an Apple device, or the simple texting on an Android device. Messenger should not be used by kids under age 13, in order to be consistent with Facebook’s own rules and due to the browsing risk mentioned above.

Parents! In order to stay current on the latest information on your favorite apps and devices, get ready to download The Protect App from Protect Young Eyes. Just tap/click here or the image below for more information!