What is Zello Walkie-Talkie?

Description: Zello is a voice-over-IP (VOIP) type app. It is touted as a “walkie-talkie” app but it does require either cell service or some form of internet connection to operate. It gained popularity in 2017 during critical events like the flooding in Houston and Hurricane Irma and became the communication tool of choice for relief workers.  Zello allows users to touch-to-talk as well as send direct messages. There is the option to communicate with a single person or to set up a channel for a group of users.

What do parents need to know about Zello?

The app looks like a fun way to connect with others! Remember those road trips growing up with multiple people in more than one vehicle and radioing back and forth between vehicles just for fun? Or running around the house with walkie-talkies and having fun talking with whoever was on the other end?

The Zello app allows both single and group chats, so teens may see this as another good option to connect with peers and groups of friends.

Sexual content and/or nudity and crude humor is easily accessible. With user controlled content, there is always a risk of exposure to unwanted content, language, images, etc. A channel can be created by anyone, so a free-range of channel descriptions and choices are available, including pornographic channels. 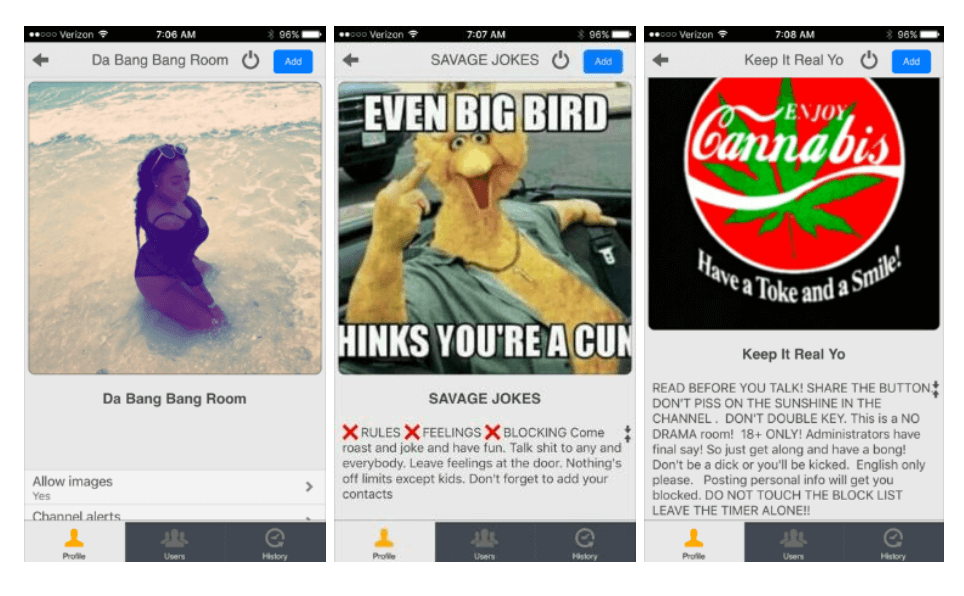 Built-in adult environment. When a user creates a new channel, an option is offered for an age rating. The Zello app default setting automatically lists the channel as 18+. The creator has the option to change it and open it up to younger users, but when teens are lying about their age online this age limit won’t keep them off these channels.

No in-app purchases or adds are available at this time.

Privacy is optional. Channels can be set up for public access or private use, creators can require certain criteria be met to become a part of the channel like a verifiable phone number and email address.

The bottom line – is Zello safe?

This app feels too mature for teens. Though, on the surface, it appears to be a fun app to utilize, the available sexualized content is extreme and terribly easy to access. With the ability to easily create 18+ channels, even though the app is rated for 12+, the potential for teens coming into contact with something you don’t want them to encounter is almost a certainty.

Remember, the easiest way to stop access to apps your child isn’t ready for is to remove open access to the app store on both iPhones and Androids. You’ll want to read more about that here!