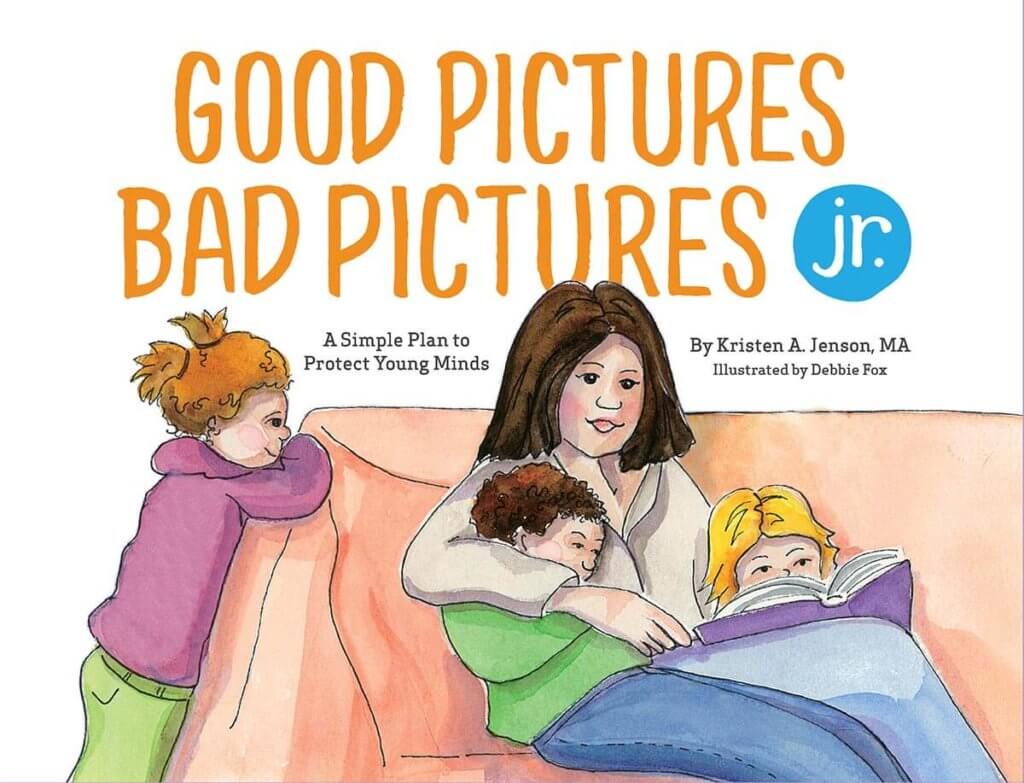 Here’s a common objection among parents:

“But, if I talk to my son about pornography, I’m afraid it will make him curious about it.”

But, is it true? Is it better to wait until kids are older, maybe in middle school, to talk to them about a sensitive topic like pornography? I recently read a new book, Good Pictures Bad Pictures Jr. that helps parents answer these questions.

It is said that “curiosity killed the cat.” But, there is not a more curious species on planet earth than a young, pre- or elementary school human child. I have three of them at home right now and they are constantly investigating the world around them and pummeling the adults in their life with a barrage of “why’s?” and “how’s?” and “show me!” from morning until night.

No, Blake, I do not know why it’s called a fart or how to say it in Spanish. (Yes, an actual conversation with my son!)

When it comes to the digital age, this natural curiosity creates great risk, especially when it comes to inappropriate pictures that are just one click away. If they see one, they might decide to keep on clicking if they don’t know what it is they’re looking at.

At the same time, kids are often quick to believe what they are told by trusted adults. Parents. Grandparents. Kindergarten teachers. These foundation figures all have immense influence over the young people in their lives [Yes, Mrs. Carlson, I still remember you!]. These adults have an amazing opportunity to speak openly and truthfully to their precious little ones.

Kristen Jenson’s newest book, Good Pictures Bad Pictures Jr. gives parents a step-by-step guide for having an open and truthful conversation with little people on the important and often awkward topic of pornography.

This is the prequel to her Amazon #1 best-selling book, Good Pictures Bad Pictures, which I have recommended to parents for years (perfect for ages 7-12). The Junior edition is appropriate to use with kids ages 3-6. For many parents, this seems too young to have a conversation with a child about pornography.

For my own boys (ages 7, 7, and 5), I’ve talked to them for years about their private parts. They know what they are and what it means to keep them “private.” It was an easy transition to say to my boys, “if you are using the tablet or dad’s phone, and you ever see someone else’s private parts in a picture, here’s what I want you to do….”

“Good Pictures Bad Pictures Jr. is much simpler with even more beautiful watercolor illustrations. It’s a hardcover book designed to be more durable for younger kids. And my illustrator, Debbie Fox, added a fun feature into it—19 hidden cameras for kids to find! The Jr. book is much less complex—I don’t go into the brain science like the one for older children. The book begins with lots of examples of good pictures and then simply states: “Some pictures are good. But some pictures are not good. They’re bad for you.” From that point, the book gives kids a simple definition of “bad pictures,” explains the importance of keeping private parts private, makes the analogy that bad pictures are “picture poison” and then provides a simple 3-step “Turn, Run and Tell” plan that prepares kids to deal with accidental exposure to inappropriate content.

My new book also includes 5 safety rules which help children stay safe from sexting and sextortion, a growing threat among kids according to the FBI. And they help parents know how to coach their kids to “forget” the bad pictures they might see.

Basically, Good Pictures Bad Pictures Jr. is a comfortable, effective way for proactive parents to empower their kids with their first internal filter —the only filter that goes with them wherever they go.”

I ascribe to the idea that when we talk openly and honestly about topics, it’s those topics that often have the least control over us. I’ve found this to be abundantly true in my own life, as I speak with my accountability partner and as I’ve counseled many young people during my time as a junior high youth director. In the secret, quiet, dark places, our thoughts often get the best of us. And, if no one has ever told me or guided me on the particular topic I’m confronted with, I’m like a boat in a stormy sea – tossed and turned with every wave, subject to the wind of the day.

Thank you, Kristen for giving parents an amazing tool for their parenting tool belt. I sincerely hope it helps parents raise a generation of children who are better equipped for the realities of the digital age.