There have been a rash of young teens committing suicide over the past few months. Snapchat seems to be the social media app most often mentioned as a key player in the suicide, giving rise to the phrase Snapchat Suicide. The ephemeral nature of Snapchat often leads to more spontaneous behavior (e.g., filming a situation in a bathroom) giving the false impression that whatever is posted will quickly disappear and no one will be caught. Unfortunately, it seems that too many of these spontaneous moments are leading to teens feeling distraught and hopeless due to extreme embarrassment or endless bullying.

As a former middle school youth pastor, there was a very short list of teen issues that just crushed me, and teen suicide was one of them. I’m such an advocate for life and taking full advantage of every moment. Therefore, to consider that a child was so beaten down by life to think that death was the only option was difficult for me to comprehend and simply broke my heart.

But, a harsh reality in our 24/7, always online, viral world, is that kids no longer have safe places. Meaning, once the bullying snowball starts to roll in the digital age, it continues to roll and build up speed even when the kids involved are separated by physical space. It used to be that once I stepped off the bus, there were very limited ways a bully could continue to torment me, without going through some kind of physical barrier, like calling a phone attached to my kitchen wall, which was probably answered by my mom. Ask.fm never shuts off. Snapchat never shuts off. The comments on Instagram never turn off. In the digital age, kids no longer have safe places. Internet permanence is real.

It’s harder to parent in the digital age but it’s also harder to be a kid. And, the statistics seem to prove it.

Heartbreaking Teen Suicide Stat: According to the Jason Foundation, there are 3,470 attempted suicides by kids in grades 9-12 daily (roughly derived from this CDC data). That is a crushing figure.

Snapchat Suicide in the News

Most recently, the hanging death of 15-year-old Sadie Riggs went viral due to the gut-wrenching obituary posted by her maternal aunt. It read:

“In an effort to debunk the rumors about Sadie’s death we would like to share this information. Yes, Sadie took her own life, she hung herself. It is hard to fathom that someone so young could be so troubled. Sadie was seeking help, she was in counseling and taking medication, but it was all too much for such a young soul to live with….Sadie had a tough life and until a recent incident at school she handled everything life served her. For a young lady so excited about going to the High School things sure went terribly wrong for her. For the bullies involved, please know you were effective in making her feel worthless. That is all between you and God now, but please know that it is not too late to change your ways. Sadie’s death has taken us to dark places, we will stick together and protect one another as we try to make sense of this tragic loss. To all the bullies out there, I just want you to know that as much as we despise your actions never, ever do we wish for you to feel the paralyzing pain that engulfs our bodies, a pain so severe that it makes the simple act of breathing difficult or the guilt that leaves us wondering what we could have done differently-or that struggle to remember the last words we spoke…Our hearts are beyond broken. Sadie, it was a privilege to have you in our lives and we will always love you. May you find peace in the arms of God and may we all be kind to one another.”

In Tampa, Florida, 15-year-old Tovonna Holton committed suicide with her mother’s gun after a nude video of her in the shower was posted to Snapchat.

In San Diego, California, a high school boy committed suicide after a 10-second video of him in a school bathroom stall emerged on Snapchat with the caption, “I think this dude is jacking off.” The young boy, identified in court documents as Matthew B, killed himself, leaving a suicide note that read: “I can’t handle school anymore and I have no friends.”

A 14-year-old girl from the UK committed suicide after being attacked by cyberbullies through Snapchat. Her mother has started speaking out publicly in order to warn other parents. “Unfortunately, there’s no getting away from it now – they have their phones 24/7. [Kids] Be careful what you say, words can’t be taken back.”

Teen Suicide by the Numbers

In April 2016, the National Center for Health Statistics released a study showing that the overall suicide rate from 1999 to 2014 increased 24% for all Americans. 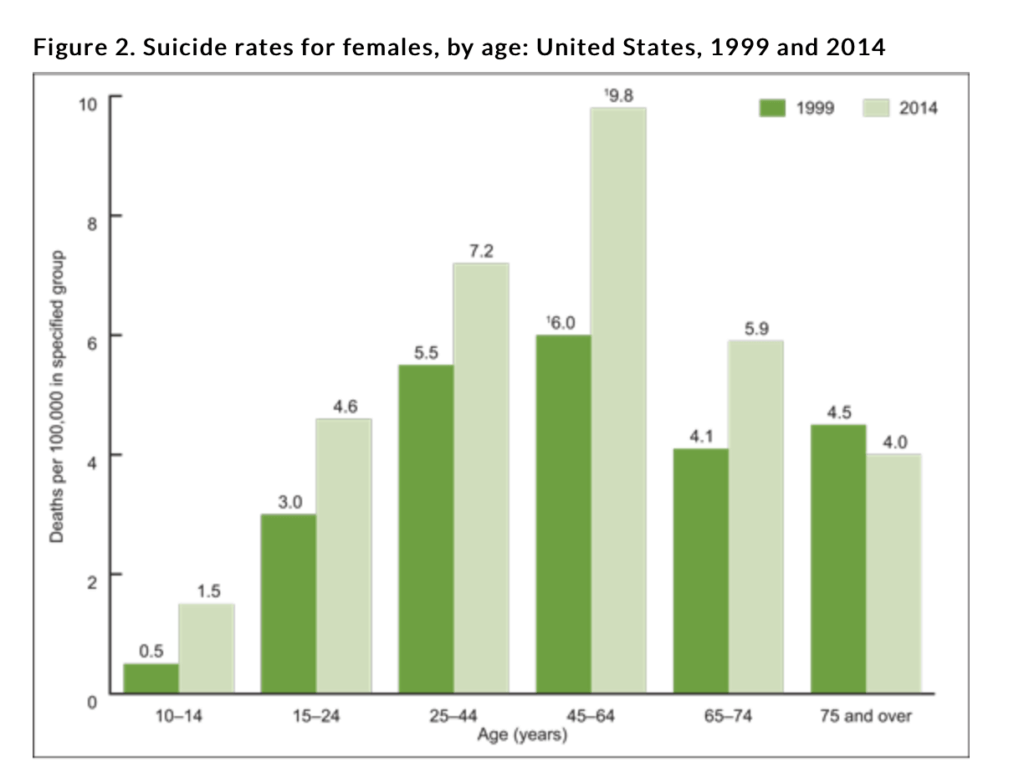 According to the National Center for Injury Prevention, suicide is the second leading cause of death for ages 10-24 and more teenagers and young adults die from suicide than from cancer, heart disease, AIDS, birth defects, stroke, pneumonia, influenza, and chronic lung disease, combined.

Is social media to blame?

In 2012, Dr. David Luxton, et. al, published Social Media and Suicide: A Public Health Perspective, which gathered information from studies performed globally that looked for evidence supporting the assertion that social media contributes to an increased rate of suicide among adolescents. Dr. Sameer Hinduja and Justin W. Patchin, Ph.D. published Bullying, Cyberbullying, and Suicide, where they reported results from a survey given to approximately 2000 middle school children that indicated that victims of cyberbullying were almost 2 times as likely to attempt suicide than those who were not. This study was completed before the rise of Snapchat. This study was completed long before Instagram was rated the worst social media app for mental health. Not every kid who uses Snapchat is a suicide risk. But, social media is most certainly having some impact on our kids.

What Can Parents Do to Protect Their Kids?

The National Suicide Prevention Hotline is: 1-800-273-8255 and they also have a chat feature. Here are some items to consider. Information about “Signs” and “Risks” has been excerpted from the American Foundation for Suicide Prevention

These actions can significantly decrease the odds that a child will take his/her own life.

There has not been a scientific study conducted in order to answer this question definitively. But, it would seem that the constant pressures of social media combined with its viral, oppressive, permanent nature create a perfect recipe for kids to feel stuck, overwhelmed, and hopeless. Parents are the answer. We believe parents who are observant, engaged, and informed often have kids who learn to use social media well. Does that describe you? If not, what are you waiting for?

Are you interested in having greater insight into the social media platforms that your kids are using? Bark is one of the best platforms we’ve tested. They’re constantly looking for ways to dig further into apps, allowing kids to use them while only alerting parents when necessary. We trust them and we think you should, too!

2 thoughts on “Snapchat Suicide: Is Social Media Killing Our Kids?”