No More Smartphones. How One Large School District Removed Distraction from Learning 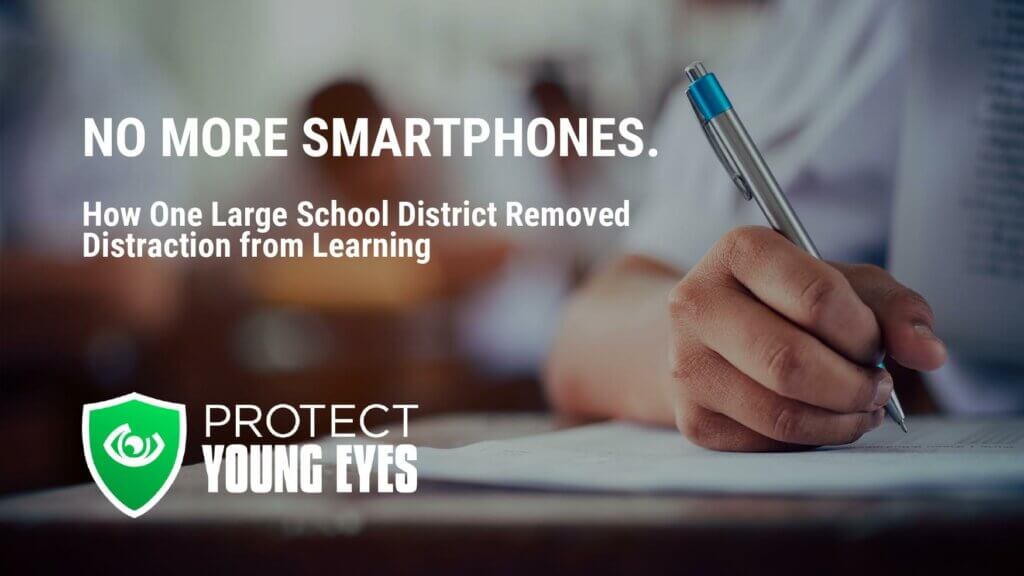 No More Smartphones. How One Large School District Removed Distraction from Learning

Forest Hills Public Schools is nestled on the east side of Grand Rapids, Michigan, with close to 10,000 students in grades PK – 12, spread across 19 buildings. Superintendent Dan Behm has been an educational leader in multiple districts, but “During my 19 years as superintendent, nothing has impacted education so quickly and significantly as technology.”

Prior to the 2019-2020 school year, Forest Hills students in grades 7-12 were allowed to bring their smart phones to school, and even have them in class. Teachers were encouraged to collect them, some using a box or others using a shoe-hanger-like set of pockets that hung from the front of the classroom.

But, the lack of consistent enforcement, the burden felt by staff to constantly be policing for devices, the pressures felt by kids, and the negative impact on learning due to the constant distraction of notifications caused Mr. Behm to ask a radical question.

What if we removed smartphones from our schools?

Mr. Behm began doing research. His suspicions were quickly confirmed with study after study pointing to the cognitive drain that occurs due to the mere presence of a smartphone. (1) He confirmed that excessive cell phone use during class impacts learning and attention. (2) He discovered that the same tech leaders who started organizations peddling these devices are the ones who send their children to low- or no-tech schools. (3)

The Vision of Forest Hills Public Schools is All learners achieving individual potential. Mr. Behm knew that this Vision Statement was not fully achievable if kids’ brains were being hijacked by smartphones.

So, he met with teachers, parents, and various advisory committees during 2019. He presented his findings related to attention and learning. The evidence was hard to argue against. If Forest Hills was going to continue to be a top-rated education system, then it was the responsibility of the district to create a more focused learning environment by removing non-educational, portable, electronic devices from all classrooms.

Even from the high school.

Student handbooks were amended, and teachers were trained on the new policy – here’s an excerpt from the revised 2019-2020 Forest Hills Grade 9-12 Student Handbook:

It has become clear that excessive exposure to cell phones has a negative effect on school-aged children.

Students will not be allowed to carry or use cell phones during the school day. Phones are available in the office of each school should a student need to contact their parent. If families believe that their child needs access to a cell phone before or after school, it will be the student’s responsibility to ensure that their phone remains stored away from the classroom while they are at school. Cell Phones/Electronic devices are not permitted during the school day and will be confiscated.

After 10 weeks living with the new smartphone policy, Mr. Behm has lost track of the positive feedback from students because there’s been so much of it. He’s never seen one change have such an impact so quickly on students.

He meets regularly with groups of students – “Soup with the Sup” – and students admit that they’re starting to like it. There’s less pressure. Kids actually talk to each other at lunch. They seem alert and fresh. Behavioral incidents are down across all secondary buildings. The kids report that they actually have fewer daily notifications, since kids don’t have their phones during the school day to send them.

But there’s one response that stands out from the rest. It came from an eighth-grade girl. While talking to Mr. Behm, she stated that eighth grade was so much better than seventh grade. She was even sleeping more this year. Mr. Behm pressed her for more information. He asked her, “Why is this year better?”

Her response remains indelibly written in his mind.

“In seventh grade, I used to spend over an hour getting ready in the morning. I had to make sure I looked perfect. All of my friends had phones, and I just never knew when one of them was going to whip out their phone in class, in the hallway, or in the bathroom and take a picture. Because of this, I felt a constant, daily pressure to look a certain way so that I felt pretty in the pictures. No blemishes. I wanted to look perfect. Now, without phones being used by everyone, the pressure is off. There’s nothing to worry about. I can be more natural. I can finally be me.”

Mr. Behm said that did it. That was all he needed to hear. All of the effort was worth it.

“You often hear about “capturing students’ hearts” in education and that’s a wonderful thing. But if you don’t have their attention, you’ll never get to the heart. In other words, we have to first make sure we capture their brains so that we can get to the heart. Smartphones were standing in the way. We (Forest Hills) had to do something.”

Possible first step: Would you like to work with PYE to discuss school policies and digital citizenship? We’ve worked with hundreds of schools around the country, like Forest Hills. Please reach out to Michele from the PYE team today and start a conversation. Our kids are counting on us.

Send a message to Michele @ PYE

Possible second step: If you’re interested in finding “tools for action” related to starting a phone-free movement in your school, there’s no place better than Away for the Day. Visit them today!

(P.S. – this is Chris from PYE. I just spoke with Dan in February 2021, and the policy is still something he is very proud of. Behavior referrals are down and it’s now just part of Forest Hills culture.)

1 thought on “No More Smartphones. How One Large School District Removed Distraction from Learning”