What’s the Right Amount of Screen Time for My Kid? 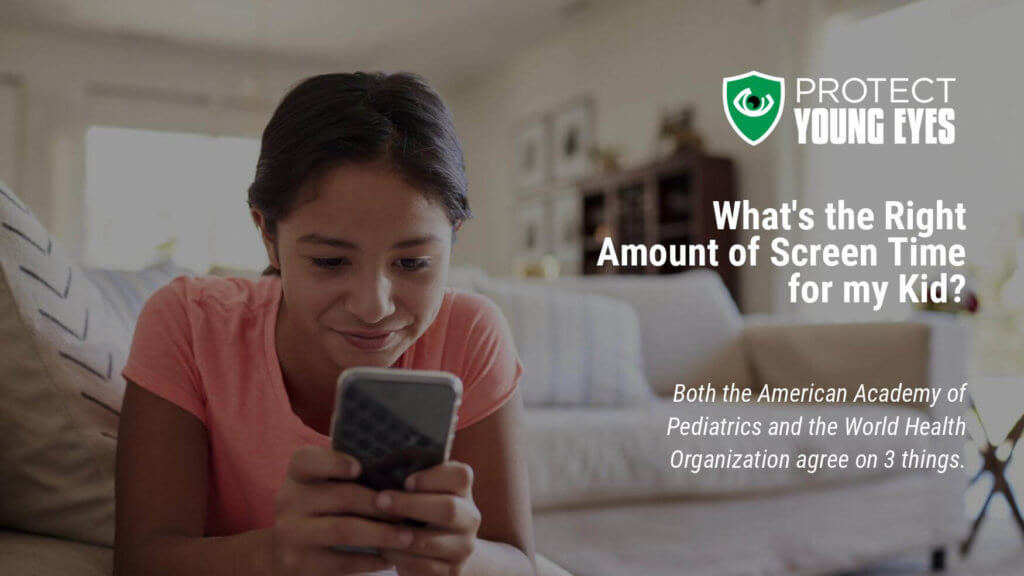 What’s the Right Amount of Screen Time for My Kid?

Screen Time – How Much is Too Much?

“Chris, how much screen time should I give my kid?” This is the burning question for many parents and educators today, and we hear it often. No one seems to know exactly the right screen time answer, but everyone feels like kids spend too much time on screens.

Some say that glowing screens may be good for kids – an interactive educational tool. Others are skeptical.

I recently met with the Curriculum Coordinator for a large public school near Grand Rapids. We were creating a strategy for informing parents in the district about digital risks and solutions for protecting their kids. At the end of our meeting, he asked:

“Chris, have other educators talked to you about their younger grades? Kindergarten, first, and second grade? It’s almost impossible to get them to sit still. The teachers are saying it’s getting more and more difficult to keep their attention. These are teachers with decades of experience. They know kids. Is it the technology? Are they getting too much at home? What are you seeing?”

I had to admit that other educators had expressed similar concerns to me during in-class presentations that we do around the country.

Recently, I decided to read the book Glow Kids by Dr. Nicholas Kardaras. It turns out that Dr. Kardaras has been counseling kids with troubling digital behaviors for years and has discovered screen time patterns worth sharing.

The simple answer is neurology. We were wired to respond favorably to actions that have a feel-good result, like sex, finding water, or finding food. These actions cause a feel-good neurochemical called dopamine to be released, which causes the brain to repeat whatever action just caused it to be released.

Certain behaviors cause different levels of dopamine to be released.

Brain-imaging research is showing that glowing screens – iPads, iPhones, Kindles – are as stimulating to the brain’s pleasure center and dopamine release as sex. Therefore, when a parent puts a glowing iPhone in the hands of a crying child, it’s as if a brain orgasm is being released. Which is the reason why kids and adults can’t put them down.

Have you ever just watched a young child who is fixated on a screen? They are zeroed in. Engrossed. You might have to call their name 2-3 times to get their attention. Their eyes are dilated. This is due to dopamine.

Science shows us that dopamine:

Keep in mind that adults have a fully-developed frontal cortex, which controls impulsivity and decision-making. And yet, just after a couple hours of your favorite fast-paced, action movie, even you have a hard time focusing on reading a book and sitting still.

In the still-developing, 3-year-old brain, this level of impulsivity control is not present. Therefore, the flashing glitter of screens starts to create an attention template (more on templates later) that no kindergarten teacher can compete with.

The neurological impact of screens on brains is so profound in some children that the University of Washington Medical Center is now using virtual reality video games instead of addiction-forming narcotic painkillers as part of its pain-management program for severe burn victims. By playing the game SnowWorld through a set of VR goggles and using a joystick to throw snowballs at cute penguins, severe burn patients find that their sensation of pain decreases greatly while playing the game.

In other words, virtual reality is taking the place of morphine.

Whether you believe it was creation or evolution, human beings have brains that are wired for rewards.

And, the creators of today’s video games are knowledgeable about our neurochemistry, using techniques like a “variable ratio reward schedule” to keep kids playing. Slot machines use this technique – rewards are distributed randomly, which keeps the player hopeful and putting in quarter after quarter. Minecraft uses a variable ratio reward schedule, by hiding ores randomly throughout the digital earth.

In Glow Kids, Commander Dr. Doan of the U.S. Navy has harsh words for the gaming industry. He was hopelessly addicted as an adult to World of Warcraft (WoW), and so he has no love for game creators.

“Gaming companies will hire the best neurobiologists and neuroscientists to hook up electrodes to the test-gamer. If they don’t elicit the blood pressure that they shoot for – typically 180 over 120 or 140 within a few minutes of playing, and if they don’t show sweating and an increase in their galvanic skin response [a change in the electrical resistance of the skin caused by emotional stress] they go back and tweak the game to get that maximum addicting and arousing response that they’re looking for.” [Glow Kids, page 22]

What is Internet Addiction Disorder?

Dr. Victoria Dunckley is a child psychiatrist who is connecting the dots between the massive increase in childhood bipolar disorder and ADHD, and fast-paced screens.

She found that visits for kids diagnosed with pediatric bipolar disorder had increased 40-fold from 1994 to 2003; that between 1980 and 2007 the diagnosis of ADHD had increased by nearly 800 percent [2].

She started to ask the question, “is this simply due to advances in diagnosis or something else?”

Eventually, Dr. Dunckley started using the label electronic screen disorder (ESS) to describe the reason for the enormous increase in attention- and mood-related diagnoses in children. She theorized that ESS was disrupting the formation of a child’s attention template. Templates are simply patterns of thinking that are established during our formative years.

But, because it’s unethical to test her theory on children by feeding them copious levels of screen time, she’s relying on the old principle in medicine that if the cure works, you probably have the disease.

By removing screens through a prescription of tech fasting from over 500 kids that have visited her practice with varying levels of psychiatric disorders, Dr. Dunckley has found a reduction in symptoms in 80% of her patients. [3]

In 2008, China became the first country to declare internet addiction a clinical disorder. According to Glow Kids, China has identified Internet Addiction Disorder (IAD) as its number one health crisis, with more than 20 million Internet-addicted teens, and South Korea has opened 400 tech addiction rehab facilities and given every student, teacher, and parent a handbook warning them of the potential dangers of screens and technology.

In 2010, when a reporter asked Steve Jobs about how much his kids must love the new iPad Apple had just invented, his response was, “They haven’t used it. We limit how much technology our kids use at home.”

Later in life, when asked about technology in the classroom, Steve said, “I’ve probably spearheaded giving away more computer equipment to schools than anybody on the planet. But, I’ve come to the conclusion that the problem is not one that technology can hope to solve. What’s wrong with education cannot be fixed with technology. No amount of technology will make a dent.” [4]

Interestingly, some of Silicon Valley’s brightest were educated in very low-tech environments. Google founders Sergei Brin and Larry Page, along with Amazon founder and richest man in the world Jeff Bezos, and Wikipedia founder Jimmy Wales all went to low-tech Montessori schools.

Consider this 1:05 video from Business Insider, reporting on the no-tech Wardorf school in Silicon Valley, with children of tech company executives making up 75% of its student population.

Pierre Laurent, a former Microsoft executive and father of two teenage boys who attended the Wardorf school said this:

“I love computers…they can do wonderful things…But, you can overuse technology and become a slave to it…Then I read a book called The Growth of the Mind, by Stanley Greenspan, which explains how we learn when we are small through our interactions with the world…We decided that there’s no harm in not exposing children to screens until they’re big enough. It can only be beneficial.” [5]

Signs of screen time addiction to look for according to Glow Kids include:

If this describes your child, just Google “technology addiction centers USA” for a screen time solution. We also provide a list of treatment centers in our blog post, “Does My Child Have an Internet Addiction,” toward the bottom.

I wish we could tell you an exact number. BUT -> whether you check with the World Health Organization or the American Academy of Pediatrics, there are three things that almost everyone agrees – the image below is from our parent presentation:

“There is nothing healthier for a child than to learn how to use their own interior resources to work through the challenges of being bored. This then acts as the fertile ground for developing an active imagination…” [Glow Kids page 127]

11 thoughts on “What’s the Right Amount of Screen Time for My Kid?”