5 Digital Trends That Threaten Children in 2022 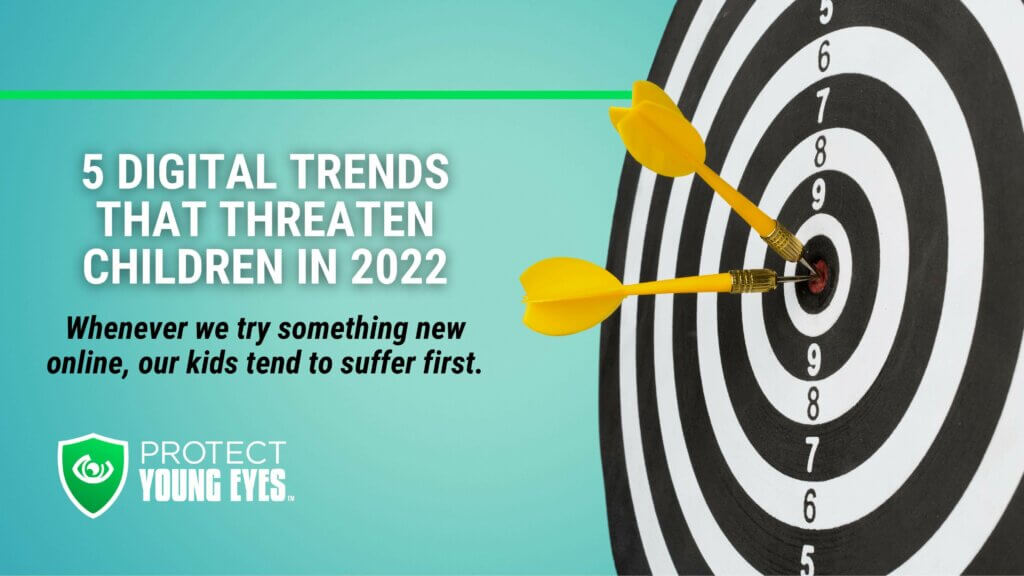 5 Digital Trends That Threaten Children in 2022

The world is speeding up! And also becoming more complex.

Two of the five are complex. Not enough people are talking about them and many lawmakers don’t understand them.

I am concerned about what these trends could do to vulnerable people, including children. This is why we’ve spent so much time trying to understand and explain them. We’re going to need your help!

According to my friend Rick Lane of Iggy Ventures, in the words of Morpheus from The Matrix, we believe 2022 will present a true red or blue pill moment. If that illustration isn’t working for you, taking the red pill means opening a digital Pandora’s Box that cannot be shut. There will be no going back on some of the harms done to children and vulnerable adults.

I recently sat through a presentation showing an image of ONE state that had over 2,000 red dots on it. Each dot represented a unique IP addresses (a computer or access point) that was trading Dropbox collections of child sexual abuse content (CSAM).

The presentation went on to specify that those were digital collections of infant sexual abuse being shared freely. I literally cried. I couldn’t believe what I was hearing.

(There’s a reason this is true – we favor innovation over child protection. It’s the American way. This warrants a separate post.)

Let’s get informed! Here are the FIVE digital trends that could target and exploit children in 2022:

Most online and app games allow users to connect with others. Today’s games and those that are set for release in 2022 will be more engaging, connected, and addictive than ever. The “connected” nature of gaming spills into social media environments like Discord or Twitch, which are havens for gamers who want to organize themselves with like-minded friends from all over the world.

THE THREAT: And as more kids use games, including mega-popular Roblox, there will be more people who want to harm kids in these digital spaces.

Most effective ways to combat this child safety issue:

One of the most empowering attributes of the internet is that it allows everyone to have a voice. This is also one of the most troubling aspects of digital spaces where moderation and community guidelines fail at preventing harmful content from being shared.

Anyone can say almost anything, to anyone, anytime.

And although the social media-driven December 17, 2021 school violence threat was not credible, schools had to respond as if it was. Especially in the wake of the horrific shooting at Oxford High School here in Michigan.

2021 saw the rise of viral challenges, primarily via TikTok (#deviouslicks) and we believe these will continue. Example – in December, when a 5-year-old girl asked Alexa for “a challenge to do,” it suggested she try the coin/outlet challenge!

THE THREATS: This means increased anxiety, trauma, and uncertain behavior among children and teens. Even the US Surgeon General has raised a warning about the deterioration of childhood mental health in his recent report. Although some teens find temporary refuge from real-life trouble by diving into digital spaces, there are unfortunately always going to be a loud and hurtful few that are going to use them for harm.

Most effective ways to combat this child safety issue:

#3: Metaverses (yes, there are more than one)

Facebook wants us to believe that the metaverse is their idea, but it isn’t. A “metaverse” is a concept, and according to one source, can be described in the following way:

The metaverse is a digital world that allows virtual user engagement by mixing social networking, online gaming, augmented reality, virtual reality, and cryptocurrency. The metaverse, which provides access to leisure and initiatives, including the ability to work, is described as a virtual world of the future.

It’s a virtual reality-fueled digital space with few rules, a battle for territory, and new, confusing problems. Imagine purchasing a digital image of an ape for a record $3.4 million in digital NFT currency at Sotheby’s (true story).

The metaverse (and related wearable tech) will follow a historical, predictable pattern of innovate -> do harm to humans (including harm to young humans who find themselves in adult environments) -> then we try to fix it. This is unfortunately how we operate.

Most effective ways to combat these child safety issues:

Hold on tight. The next two trends are complicated but have the potential to do truly unspeakable things to children.

#4: The “Darkening” of The Internet Stack

This trend is confusing but it is already impacting child protection. And almost no one is talking about it.

Without going into a history of the internet, we are evolving toward the “darkening” of digital ownership. In other words, if we don’t know who owns a digital space, the conduct in that digital space generally progresses toward depravity (e.g., infant CSAM), and laws and law enforcement can’t do anything about it.

This amazing illustration from Mr. Lane, explains it well:

You wouldn’t go into a store that has no markings at all. You always want to know who owns that store that you’re going into, because if you have a problem with that store, who are you going to contact? …By buying land here in the United States, you know, there’s an ownership. I can go to the land records, and it has all the information about who owns the land.

I’m guessing that few of our PYE followers have thought much about Verisign, ICANN, or domain name registrars like GoDaddy. But you depend on them every time you get online and these powerful entities are making it increasingly more difficult to know who the bad guys are. What’s worse, our lawmakers often don’t understand these issues. This all equals increased harm to children in the form of CSAM that cannot be tracked. Please read that last sentence again.

Here’s a wonderful picture from the Washington Post that explains the “internet stack,” and where the problem is:

THE THREATS: The disturbing impact of this trend on children is obvious. A darker internet provides fertile ground for child exploitation of every kind. If we don’t know who the bad guys are, and the bad guys know they won’t be caught, more will show up and do even worse things (just see the dark web as an example of this).

So what’s the most effective way to combat this complicated issue?

This one is tough. The internet registration system was created by the US Government under the Clinton Administration in the 1990’s, and it’s a messy, complicated, and political one to fix.

This child safety issue can only be solved with swift government action. Politicians at all levels – state and federal – must be educated about this risk, and that can start with you.

In 2021, Protect Young Eyes joined Mr. Lane and 12 other child advocacy groups and signed a letter to the Department of Commerce, encouraging adoption of Executive Order 13989 requiring internet “infrastructure as a service” (IaaS) providers verify the identities of foreign individuals and entities seeking to use the IaaS providers’ services. PYE is already in discussions with other major child safety groups about mobilizing our efforts, with your help, in 2022.

And, now for the trend that concerns me the most.

This trend presents the most risk to all of us.

We currently live in Web 2.0 – where a few, large organizations control the organization and distribution of most digital content (Google, Bing, others).

BUT – Imagine personalized digital content, everything shared freely, content owned by you (basically everyone owns their own version of the internet), no censorship, everything anonymous, and everything permanent – locked into digital space forever with blockchain technology, the same tech behind cryptocurrency.

Although I just said a lot of really terrifying things, I might have lost you. That’s OK.

Honestly, it’s not important to understand how Web 3.0 works. When you flip a light switch, you probably don’t understand how the electricity is made but you understand its impact. Let’s think about Web 3.0 in the same way.

Here’s an impact assessment of Web 3.0 from Mark Datysgeld, one of the 21 ICANN council members tasked with developing policy for how internet web addresses work (in other words, he’s at the tip of this spear):

“A few such [Web 3.0] projects are already in operation, enabling…users to carry out censorship-free interactions. These interactions are also theoretically permanent, given the nature of blockchains. It is as if current social media applications did not have a delete button or a moderation staff.”

…social networks running under such a model should be quite clear…struggles with questions of abuse, exploitation, cybercriminals…Adding the anonymity currently afforded by darknets with the permanence of a blockchain would likely deepen these problems.

That’s a lot to digest. But boiling it down to basics:

THE THREATS: Anonymity ALWAYS fuels exploitation. Boundless digital freedom ALWAYS leads to unspeakable digital behavior. And in the Web 3.0 world, the “products” of this behavior could be permanent. No delete button. Trauma, child sexual assault, and our worst moments will exist forever.

Yes. In theory, unspeakable child sexual exploitive acts, including the infant abuse mentioned above, could be preserved forever, unable to be deleted because of blockchain.

Once Web 3.0 is unleashed, there’s no taking it away. We will have taken the red digital pill – opened a digital Pandora’s box.

Which is why it’s so important for child advocates to rise up and educate both the public and politicians about what could go wrong. PYE will be at the forefront of these complicated conversations, mobilizing our followers at the right time. We will need you!

Some conclusions as we head into a new year!

We are in the verge of really complicated child safety problems. And, with your help, we will continue fighting for kids and families. For now, stick with the basics:

At Protect Young Eyes, we take very seriously our responsibility to tackle complicated tech issues, make them understandable, and give families practical steps for preventing harm. But as the issues get bigger, we will need your help! Stay close and we will let you know when to take action.

Keep learning about the best ways to protect your kids in 2022 with The Protect App!