As of June 9, 2020, this app was removed from the Google Play Store due to stolen content. The Apple App Store followed suit a week later.

Description: Zynn is a copycat app out of China, borrowing everything from TikTok. Everything. Short-form, 15-second videos with stickers, music, effects and more. It has a singular purpose of growing through a pay-to-watch and share pyramid scheme.

It pays you to watch its short videos. Time watching turns into points, which can then be redeemed for gift cards or cash via PayPal. Certain activities, like creating an account ($1) also earn money.

Zynn is owned by Kuaishou, a $30B tech start-up that’s trying to compete with Douyin, the Chinese owner of TikTok. In other words, don’t let the California address fool you – that’s all for looks as Zynn tries to buy US market share.

As of the writing of this app review, Zynn was still the #1 free app in the Apple App Store, which is quite an accomplishment. Here are the top three on June 11, 2020: 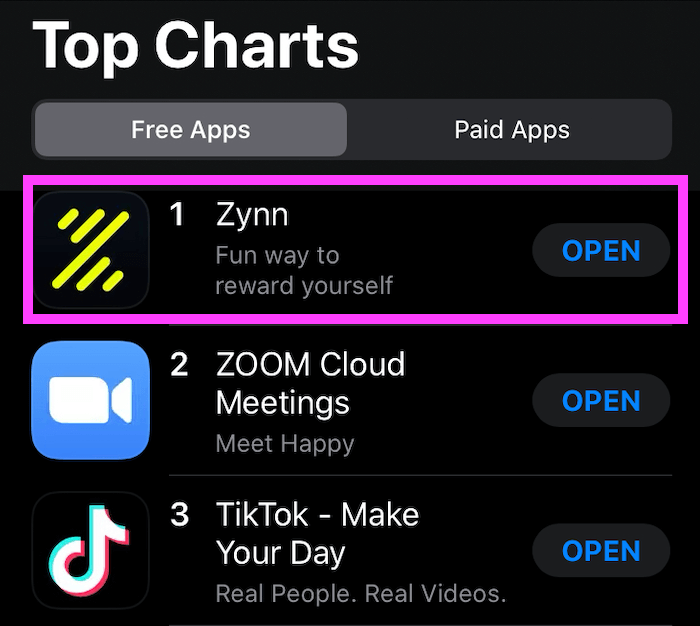 Now Zynn is being accused of simply copying videos from influencers and illegally posting them, which now has them banned from the Google Play store. Here’s a quote from Wired magazine:

“…Zynn is filled with videos that appear to be stolen from creators on other social media platforms, including TikTok celebrities with massive followings like Charli D’Amelio and Addison Rae…Four influencers who spoke to WIRED said videos they originally published to TikTok, Instagram, or YouTube were uploaded to Zynn without their consent, under accounts they didn’t open.”

What do parents need to know about Zynn?

Below is a list of items we try to evaluate with each app we review. But Zynn is unique – it’s doing something that no other traditional social media-like apps has done – it PAYS you to use it.

So, we don’t even have a category for that kind of feature in our normal list of things we look for. But here’s a quick run down of how payments work in Zynn:

No, we flipped through the recommended videos and nothing inappropriate came up. We also tapped into followers on accounts, looking for those that have names the include explicit words, and didn’t find much either.

No. There’s no messaging.

No. Not with other users but Zynn’s privacy policy states that it collects geolocation information if you are sharing this information in your settings.

Does Zynn have direct messaging?

No. This also puts it low on the cyberbullying list. There just aren’t many ways to interact with others, other than following their account or liking their videos.

Does Zynn have ads and in-app purchases?

Yes. Ads around every corner.

Does Zynn make it easy to report bad content?

The bottom line – is Zynn safe for your kids?

Zynn is a privacy nightmare that doesn’t care about anything other than growth. That’s a recipe for something that just isn’t safe for young people. We advise you and your kids to stay away!

3 amazing ways to keep tabs on an app like Zynn: