What is the Photo Roulette app?

Apple App Store Description about Photo Roulette: “In Photo Roulette, you and your friends team up and engage in a highly social game on your phones. In each round of Photo Roulette a random photo is chosen from one players’ photo library and briefly shown to all of the players. The players compete in quickly guessing whose photo it is, receiving a score based on time and accuracy of their answer. After 15 pictures, the Photo Roulette champion is crowned!”

3-50 players participate in a competitive and easy-to-learn game.

What do parents need to know about Photo Roulette?

Kids take a lot of photos (and videos) they don’t want everyone to see. But unfortunately, Photo Roulette doesn’t care! If it’s in your camera roll and you haven’t specifically set the photo to private, then it has the risk of being selected by the game. We tried the app and were caught off guard multiple times with the thought, “Oh! I didn’t remember that picture on my camera roll!”

The app says to be at least 16. Even though Photo Roulette is rated 17+ by the Apple and Google, the app gives conflicting information for parents by saying it’s appropriate for 16-year-olds. 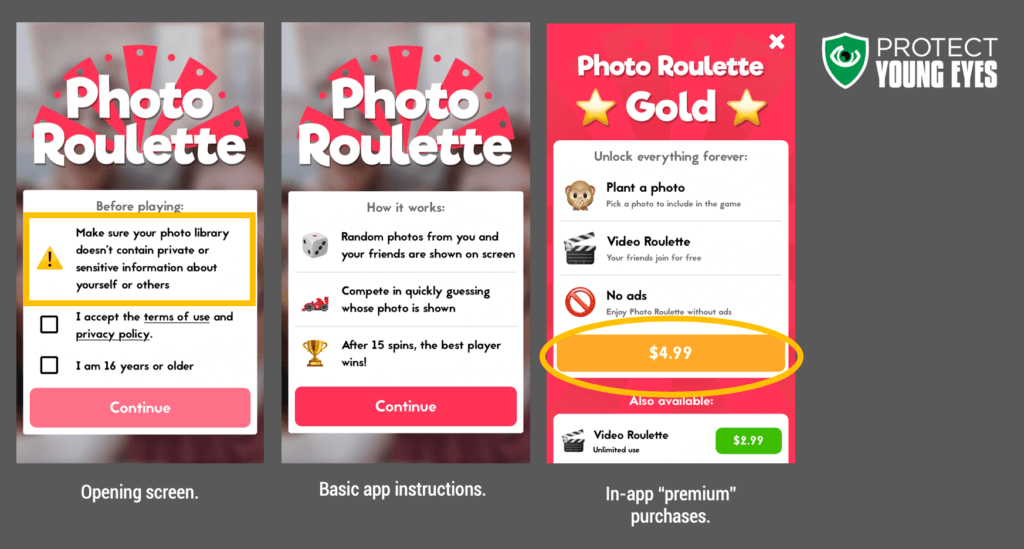 It feels like Snapchat, but with LESS control. The photos only appear for 5 seconds and you don’t get to pick which photos are shown. Not to mention that if you read the App Store reviews, some users have reported seeing inappropriate images that don’t belong to anyone in the game!

Privacy is a concern with this app. They keep your photos for 24 hours. Not to mention that your friends can screenshot ANYTHING. There’s no Snapchat-like notification telling you if someone takes a screen shot, so you’ll never know.

Your game pin allows you to hand-select who you game with. This is somewhat of a redeeming feature since you’re not randomly connected with other strangers on the app. Just be sure to tell your son or daughter not to publicize their Game PIN on less private platforms like Instagram or Snapchat.

The bottom line – is Photo Roulette safe for your kids?

The app has obvious risks. Any app that combines large groups of teens, a digital environment, and sharing random things is just inherently going to have the potential for embarrassment or worse, something that radically impacts someone. Remember – teens take pictures of EVERYTHING. They might not share everything with everyone, but Photo Roulette doesn’t just select the pictures you want publicized. The App Store gets it right with 17+.