As of December 12, 2020, the Squad app is no longer available after it was acquired by Twitter.

What is the Squad app?

The best place to hang out.

The idea for the app came from a 14-year-old girl named Emma who wanted a better way to chill with her best friend when they weren’t together in person. She wanted to be able to see each other while watching videos, playing games, reading text messages, looking at photos and listening to music together.

Relax and be yourself

There are so many apps where you have to perform or look good. Squad is not like that. You can call friends while lying in bed or while putting your makeup on in the morning because it’s a place to be the real you.

What you’ll find on Squad:

Squad is the closest thing to hanging out IRL.

What do parents need to know about Squad?

Here’s a list of items we try to evaluate with each app we review.

That all depends on the content being streamed in each Party Line. If you limit your interaction to people you know off the internet and trust, you can greatly reduce the risk. With the test account, we asked young users if they had seen inappropriate content on the app and they affirmed that they had. One Party Line was titled “No Creepers Please” while others were titled, “I want a gay boyfriend 11-13,”  “imma strip,” “boo bs,” and “I will commit suicide unless s…” While most rooms are innocent kids looking to share streaming content, like any app with user-generated content, you run the risk of accessing inappropriate content. 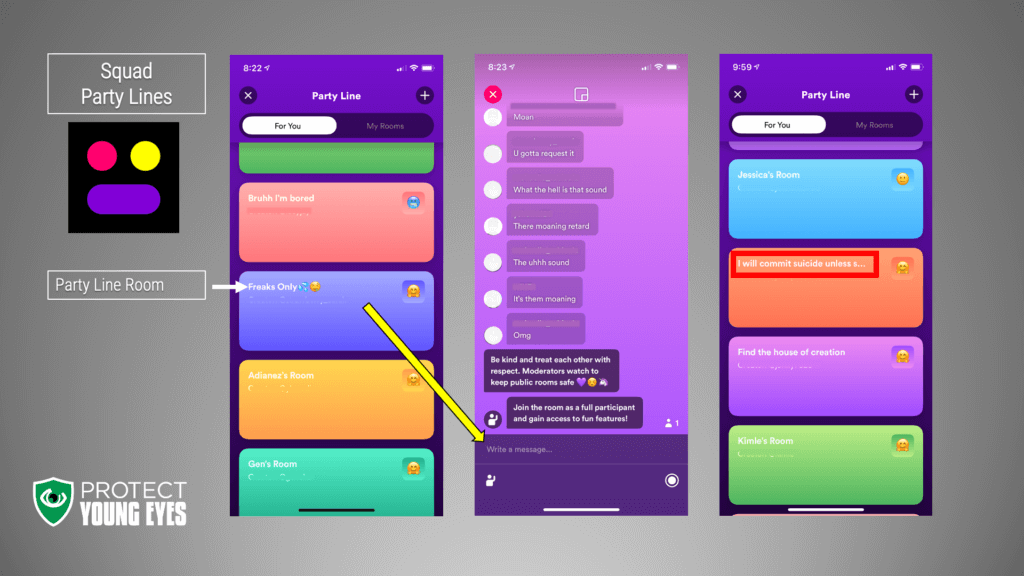 Does Squad have default public settings?

Yes and No. Any user is able to enter any Party Line by default. While you can invite specific people in and block others after they have entered, they still have access. It’s like having a slumber party with friends but you can’t lock the doors of the house and you have an OPEN sign lit up at the front door. You can always call the police after they’ve entered, but you can’t keep them out.

You do, however, have to accept followers and your account is not discoverable by default. 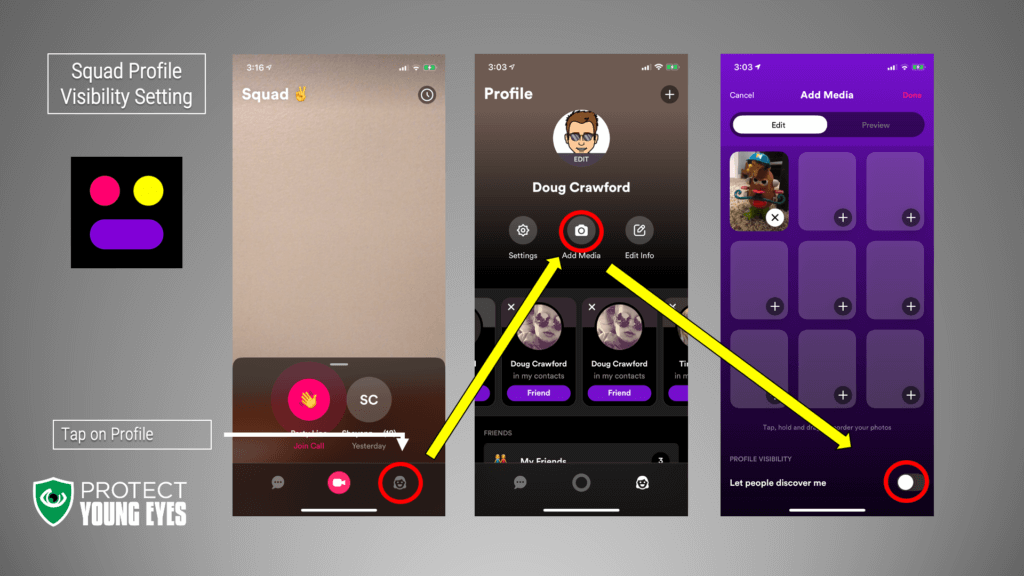 In order to use the Squad app, users must include age, phone number, and a photo or avatar. Also, your profile name, age, and image are displayed.

Not in the strict Snapchat sense, but it is a live interaction, which means there’s no taking it back.

Does Squad have direct messaging?

Does Squad have ads and in-app purchases?

Does Squad make it easy to report bad content? 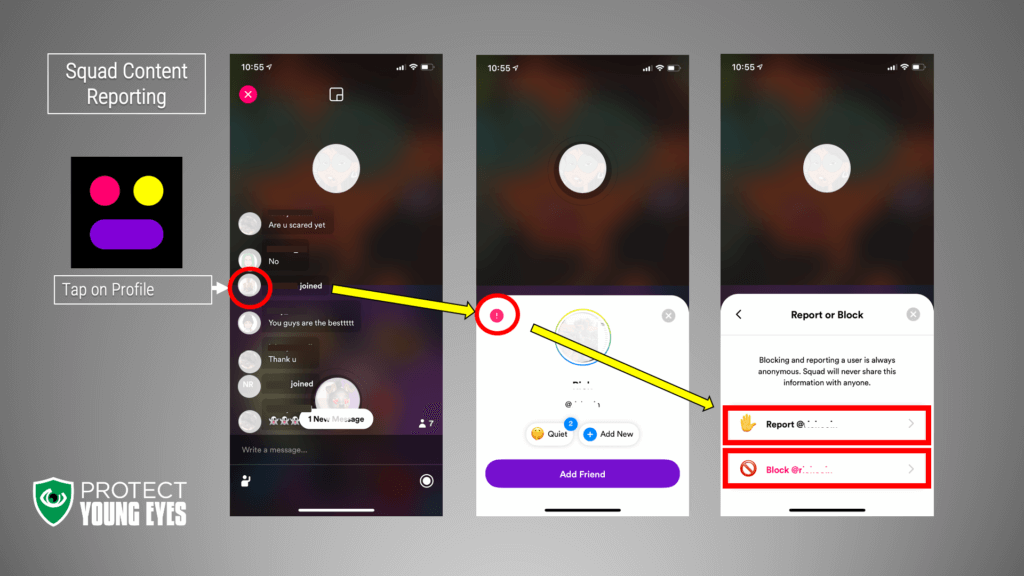 Somewhat. If you have a Snapchat account or cell phone number, you can create a Squad account. Creating a Snapchat account is easy, therefore, account verification is weak and really anyone can join. As a result, even if an account is reported, it’s easy for offenders to jump back in quickly. The process does send a verification code to the cell number entered which must be entered to continue account creation. 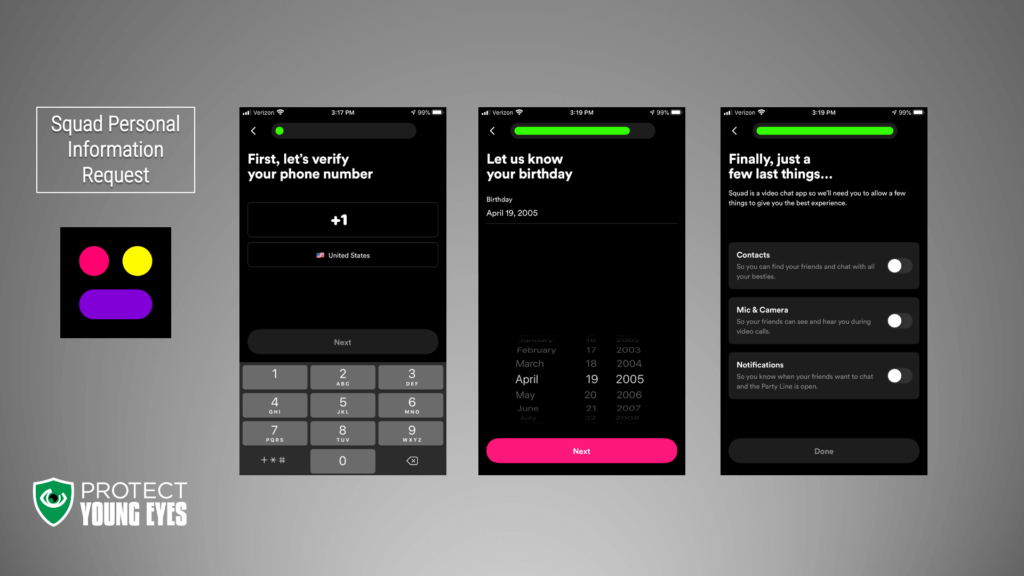 Yes. Because anyone can join a room, there is opportunity for a user to jump in with images, videos, or comments before being reported or blocked from the room.

Yes. What could possibly go wrong with an app that allows anyone to join a Party Line without permission? Our test account quickly had young girls join its Party Line looking to talk to strangers and meet new people online. Subsequently, we discourage unmonitored use by kids.

Squad guards privacy like any other social media platform, sharing account details with third parties (like Snapchat), but also collecting location data through your IP address, device, browser details, and use of “cookies.” Anyone using other social networks is already sharing more.

The bottom line: Is Squad safe for your kids?

This app is for 17+. This app is ripe for predatory activity. We’re just not fans of apps whose features almost encourage interacting with complete strangers.

3 amazing ways to keep tabs on an app like Squad:

Ready to monitor social media? Then it’s time for Bark.

Because the app is brand new, no one monitors it yet. But, Bark can send an alert when new apps are downloaded. Plus, they cover plenty of other apps that kids love, including texts, chat, email, YouTube, and 24+ social media platforms for signs of cyberbullying, suicidal ideation, adult content, and more.

Parents and guardians don’t have to read every message — instead, they’ll get alerts only when there’s a potential issue. Sign up today for a free, one-week trial!